As a partner of the West Coast Fever, Flight Centre had a number of assets within their sponsorship package offering opportunities to activate the partnership with Perth’s elite netball team. Two activations central to their sponsorship were on game day at RAC Arena in both the West Coast Fever Fan Zone, known as Fever Alley, and naming rights to a premium corporate function space called the Flight Centre Circle.

These two areas presented vastly different demographics to engage so Flight Centre teamed up with Adept Photo Booths to provide meaningful and engaging activations for patrons and guests on the two areas.

Elite sport is extremely aspirational in its nature. Kids grow up worshiping heir idols on the sporting field, or in the case of the West Coast Fever, the court.

The aim was to place fans in content with their heroes to provide highly engaging and sharable digital content. Being a multiple game activation, the creative concept changed from week to week to incorporate new players and different action shots.

The first activation replicated the West Coast Fever match day promotional collateral. This allowed users to be in a poster with their heroes and act out a pass or shot in a netball context flanked by to action shots of West Coast Fever players with a green screen photo booth.

The second scenario we created was a player headshot including the featured players signature. In this experience, the user had the opportunity to pose in a photo with a player of their choice prior to the game starting.

As part of this activations we were able to provide full analytics of each game day. This analytics included the number of images taken, number of SMS and emails sent (including data capture) and social reach by channel.

This greens screen photo booth activation was digital only to not only encourage social sharing, but push entries of a promotion for users to win a $500 travel voucher accompanying the email or SMS of the photo of GIF files. This provided a highly engaged activation with a strong call to action amplified by the content often being sent to a child’s parents phone where they could click a link to access the photo and also a link to win a $500 travel voucher. 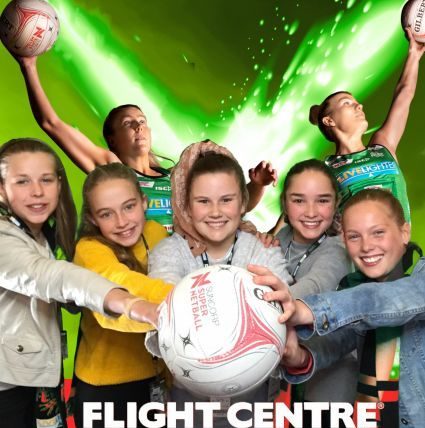 Check out each of the galleries for yourself at the below links:

The Roaming Photo Booth lets us take the photo experience right up to the guests which suits a semi-formal cocktail setting perfectly.

As part of this activation the objective was to collect email addresses and engage the guests directly. This was achieved by a Flight Centre representative accompanying the Roaming Photo Booth host to personally interact with the guests. It proved to be the perfect ice breaker for some meaningful conversations.

Following the personal interaction, each guest who emailed themselves a photo received a personalised email, including a photo, of the Flight Centre representative that they had just spoken to. This is what we call a warm introduction!

“Adept Photo Booths were an amazing supplier to work with and help activate our corporate partnership with the West Coast Fever. They were professional, came up with great ideas and definitely helped us succeed with his roaming booth and green screen set up.”

“Nothing was too hard or couldn’t be done. Adept Photo Booths were able to customise everything we needed. Highly recommend.”

It is feedback like this that drives to push the envelope of the next photo experience that we provide. Everyone in the Adept Photo Booth Perth team is looking forward to our next challenge.